Established in 2007, the Favour Stud is a registered thoroughbred horse breeding and training facility with the National Racing Authority. They are members of the Thoroughbred Breeders Association, The Cape Breeders Club and finally the SA Racing Association.

Still Bay is a small coastal town at the tip of Africa were the Goukou River flows into the Indian Ocean.

Favour Stud farm is presently home to some of South Africa’s finest thoroughbreds and  are futhermore  quickly becoming one of the leading breeders in South Africa.

They breed some of the best race horses in South Africa and in addition actively partaking in the horse racing industry.

Sales preparation also the Spelling, Backing and pre-training and furthermore the Equine fitness;

The training and direct racing of the horses as well as the direct stud sales and finally accommodation for clients.

As a result of the high quantities of water and the tranquil surroundings, the stud farm is perfect for breeding and training of thoroughbred horses. Favour Stud is deep-rooted with natural draining water while spaning over approximately  300 hectares of land.

Ernst and Engelize Du Preez acquired the farm in 2007. His personal involvement with the stud and most noteworthy his winning philosophy have set the standard for Favour Stud’s team of dedicated professional managers and staff. 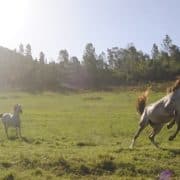