Steve has been making knives since 1979. Many years later he and Michael Fellows developed a folding knife with a unique locking mechanism. They decided to file a patent for this mechanism in order to protect the manufacturing thereof.

They named this the Felcon Lock mechanism, using the first three letters of their respective surnames and joining them together, thus ending up with Fel+Con. Consequently they formed a company, Wilcospex Knives, to manufacture as well as protect the Felcon lock mechanism.

At first Fellows and Conradie worked together making the folding knives, but later Fellows left the company. Steve Conradie is now responsible for the manufacturing of the Wilcospex knives and has expertly hand crafted more than a hundred knives under this patent.

Steve has an eye for lines, balance and proportion. That shows in the clean flowing lines, curves as well as shapes of his knives. He uses a variety of materials for the handles such as hard woods, bone, horn as well as ivory.

A Wilcospex knife is an excellent choice for a gift for a special person who happens to be a knife-lover. Why not contact Steve today?

In either case, Steve lives in Still Bay in the Western Cape, just off the N2 near Riversdale along the Garden Route. 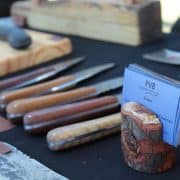